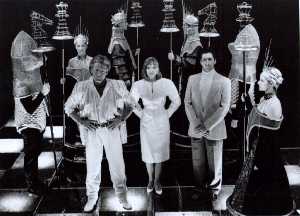 Shortly after the US Touring Production opened in Florida, another version of Chess opened in Chicago, at the Lincolnshire Marriott Theatre. It was directed by David H Bell who, along with his creative team had been egger to stage the show ever since seeing it in London. The theatre is in the arena style, so this was probably the first ever production staged in the round, though it could probably be more accurately described as in the square!

The team were obliged to use the Broadway book, but were able to make at least a few alterations. They felt the Broadway characters were somewhat unsympathetic and this was one of the major aspects of the show they wanted to try and correct. With small line alterations they were able to make the characters seem more human, more sympathetic and more likeable.

During the Prologue Gregor Vassy sings The Story of Chess and also Apukad to his small daughter. He makes two amulets from chess pieces, giving one to his Florence before she is taken from him. At the end of the show Florence is told Anatoly has been traded for a CIA agent, but then someone brings her a parcel from Anatoly. When she opens it she finds a chess piece just like the one her father gave her. Anatoly had suspected that she might get tricked by Walter and Molokov and made his own deal. An old man is brought to Florence, the Apukad as they are reunited and the chorus end the show with a choral Anthem reprise.

Being a theatre in the round, the sets by necessity had to be kept to a minimum. The stage was a chess board with locations created with skilled use of lighting and by raising sections of the floor to represent beds and tables. In several scenes locations were overlapped, with one bed serving two separate hotel suites, creating very fluid scene transitions.

A number of human chess pieces were introduced including an American and Russian King and Queen and several Knights. These were used to emphasise or illustrate certain elements of the plot and metaphors within the story. Dressed in beautiful black, gold and silver costumes they moved through the action, helping to create location and scenes.

The production was very well conceived and executed, which managed to win over even the older and less adventuress members of the theatre's regular audience. It got good reviews and its limited run was sold-out.

​Prologue - Budapest 1956
​​
PROLOGUE MUSIC / THE STORY OF CHESS
APUKAD Florence's father gives her one of two chess pieces on a chain, keeping one for himself

WHAT A SCENE!
Press Conference - reporters ask questions - Freddie storms out
PRESS CONFERENCE - "Well what did we say, he's out of his tree...."
SMILE, YOU GOT YOUR FIRST
Walter, Freddie and Florence / Anatoly and Molokov (Split bedroom set.....)
WHERE I WANT TO BE
HOW MANY WOMEN
THE ARBITER
Molokov & Florence - About the chairs
US v USSR (Encouraging times, but only first verse)
THE ARBITER (Continued)
CHESS 1
Yoghurt!
QUARTET
Molokov and Florence - arranging the meeting
Walter, Florence, Freddie - Publicity and discussing Freddie's walk out
YOU WANT TO LOSE YOU ONLY FRIEND?
SOMEONE ELSE'S STORY
ONE NIGHT IN BANGKOK
The Restaurant - dialogue
TERRACE DUET
CHESS (Reprise) In the middle of the duet... staged as a pas de deux)
TERRACE DUET (Continued)
WHO'D EVER THINK IT
CHESS 2
FLORENCE QUITS
A TASTE OF PITY
NOBODY'S SIDE
Underground Car Park: Walter, Flo and Anatoly - defection
REPORTERS
ANTHEM