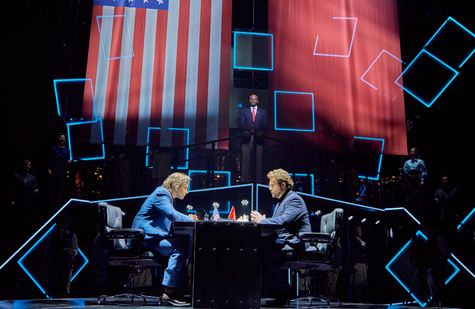 ​Anatoly: Michael Ball
Florence: Cassidy Janson
Freddie: Tim Howar
The Arbiter: Cedric Neal
Svetlana: Alexandra Burke
Molokov: Philip Browne
​
In the spring of 2018 a brand new production of Chess had its premier at the Coliseum theatre in London. It was part of an annual 'musicals' season at the theatre, which ordinarily stages opera by the ENO (English National Opera) company. These annual musical productions were produced by Michael Linnit and Michael Grade in association with the ENO company. They had originally been referred to as semi-staged productions and had so far seen, Sweeny Todd, Sunset Boulevard and Carousel being presented in such a way. The productions were said to be growing in size and so nobody really knew what to expect with regards to just how big or even possibly nonexistent the set would be for Chess.

The word before hand, was that this production would be a new interpretation of the concept album, with the inclusion of Someone Else's Story (written for the Broadway production in 1988) and He Is A Man, He Is A Child (written for the Swedish production in 2002) this made it clear that Svetlana was going to have a bigger role than in most productions. In the end, it transpired that she would in fact also sing Someone Else's Story (originally sung by Florence) so her role was in fact bigger than in any other production, as she now had two whole songs and of course half a song with I Know Him So Well.

By all accounts there were some problems with casting. Performers who were originally hoped to appear were ultimately not available or not interested enough to take part. As a result the final cast was announced quite late and even after that it changed slightly. Murray Head, who had of course played Freddie on the concept album and in the original London stage production, had been cast as The Arbiter, but he left the production shortly after rehearsals began. The final cast were all good performers and with the reputation of the ENO orchestra and chorus, the production was eagerly awaited by many musical fans and without doubt, all Chess fans.