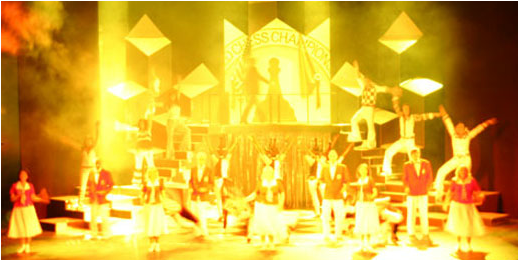 Apparently this production was inspired by Tim Rice himself. He had been in Tartu several times before to see productions of Evita, Aida and  Jesus Christ Superstar. On a visit in 2003 he suggested that he would like to see what they could do with Chess. The 2004/5 season had already been programmed, but Chess was slotted into the 2006 season.

The director, Georg Malvis, concentrated on the love affairs rather than the Cold War elements of the story. From what I can gather he set the story during a performance of the musical Chess, with the performers playing both the Chess characters and also those of the actors putting on their production of Chess. Some scenes took place backstage, showing the events in the lives of the actors, expressed in the words of songs from Chess. Very confusing, but certainly different. 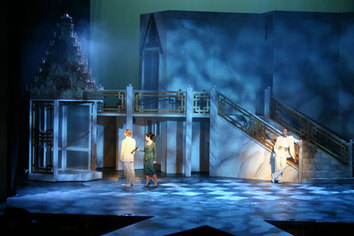 Georg Malvis:
Is it a game between nations? Is it a game between people? A game of love? Chess is all of that, but first and foremost it is a game of love. Three people, all of different nationalities, play a game of love and hate, a game of jealousy and of a battle against one’s own loneliness. Chess is a dance around love; it is also a dance in front of the television and cameras. This show does talk about love, but off-stage all the players are human beings with all of their problems and their need for tenderness. Chess is a game that we all play amongst ourselves. We like to win, but from time to time we also need to lose in order to understand our humaneness and our needs. This musical with the wonderful music of ABBA provides brilliant entertainment, as well as strong and moving drama. As politics plays its role on the background, it makes the players all the more interesting and human. 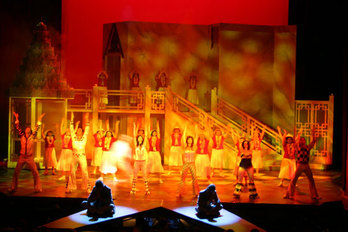 ​​Georg Malvis:
Chess is maybe one of the musicals with several lives. After the first night in London the material of the productions in New York and Stockholm was totally different. The New York and Stockholm productions even include changed text, a totally changed order of songs, newly composed material and a different story line. I tried to find my own approach. For me the love story was the most interesting part of the material. A lot of questions from my own professional life inspired me in this production. Life beside the stage and life on stage are both intriguing and exiting in the theatre world. This time I wanted to present them both in connection with each other. 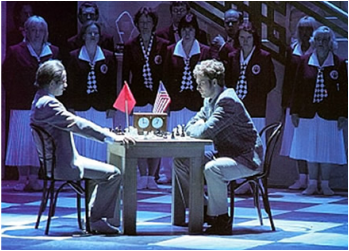