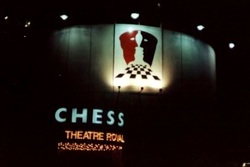 ​﻿The Sydney Moves﻿
After Chess had failed to impress the New York critics or draw a big enough audience to sustain a long run on Broadway, it was unclear exactly what the future of the piece would be. The composers were understandably disheartened by the show's early closure and perhaps felt less than enthusiastic about trying to mount another production. The show was still playing to reasonable houses in London, but with no major name now appearing in the cast, box office returns were beginning to fall. With a production in London, struggling to return its investor's money and an early closure on Broadway, it might have been quite some time before another major production was staged, but there was an Australian producer who had wanted to stage Chess for a long time.

His name was Kevin Earle and he was known to Tim Rice mainly because of his success with the original Australian production of Evita. Before Chess opened on Broadway Kevin had inquired about the possibility of staging the show in Australia, but at that point it was not possible to issue a licence for production anywhere other than Broadway.

After Chess had closed in New York, several offers to produce the show in Australia were proposed, but none of these materialised. Producer Wilton Morley had an option on the rights for a period of time, but his attempts at putting together a production had failed. Eventually Kevin Earle acquired the rights and began planning a Melbourne opening in August 1989. This production ran into difficulties too and Kevin was unable to secure financial backing and was forced to pull out of this option.

Luckily the director of the MLC Theatre Royal Company, Fredrick Gibson, was on the lookout for a production to reopen the company's Theatre Royal in Sydney, following a $4.5million refurbishment. A co production with Kevin Earle was eventually agreed upon. An opening date of 3rd February 1990 was announced, with a production budget of $3 Million.

Tim Rice was eager to see his original ideas for the Broadway script, which had been rejected by Nunn, given the chance to prove themselves on stage. With Kevin Earle's top notch production team came Jim Sharman as director and Brian Thomson as set designer. Jim and Brian had staged what Tim believed to be the definitive production of Jesus Christ Superstar in both London and Australia, so he had every confidence that together they could create the definitive production of Chess.

Tim and Jim began working on further developing the script, finding new ways to bring the story to life. Surely this new version Chess would be third time lucky. Sadly, the production team suffered a terrible blow when Kevin Earle died from a heart attack in November 1989, just weeks before rehearsals were due to begin. The production, however, was kept on schedule and rehearsals began on 4th December. 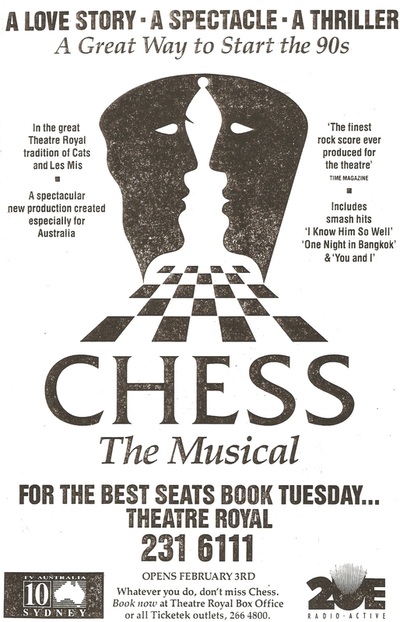 Many of the changes made for Broadway were discarded, though Freddie was retained as a chess player for the whole time span of the show. The two location setting for the tournament was scrapped and the entire show was set in Bangkok, taking place over a period of just two weeks.

Florence became British again, but a Czechoslovakian refugee rather than Hungarian. Her father was a well-known chess champion who had died during the 1968 uprising.

One Night in Bangkok was relocated to near the top of the show and was sung by both Freddie and Anatoly as they explored the exotic location in which they would be undertaking the battle for the championship.

The Arbiter very much became the narrator of the piece, much in the way he had been during The Deal in the London, but now much more visible throughout the whole show and assisted at times by the chorus.

Musical themes from One Night in Bangkok were used in various places and in a number of styles throughout the score. With the use of Thai traditional dance and rituals the piece was given a consistent and authentic feel which helped to portray the location and atmosphere to great effect.
Tim:
It (One Night in Bangkok) always seemed like a top-of-the-chart song we thrust into the show. It wasn't, but it always felt that way. I tried to change that. [From an interview by Sylvia Stoddard the day after the show opened in Sydney]
Several pieces of music and lyrics written for Broadway were retained or reworked, such as How Many Women and Let’s Work Together. The latter being incorporated into The Deal, which had been reinstated in much the same place as in the London original.

There was some sections of dialogue as on Broadway, but these were usually quite short and often gently underscored, which helped greatly in keeping the plot moving.

Act One ended just after Florence sang Heaven Help My Heart, with Anatoly, Freddie, Svetlana and the chorus joining her at the very end in an exciting reworking of the Heaven Help My Heart melody. It merged into a stirring reprise of a line from One Night in Bangkok, which perfectly expressed the feelings of the characters as the curtain fell. This proved a dramatically effective way to end the first act and a highlight of the show. 'One night in Bangkok and the world’s in turmoil...'

Anthem was moved to the early part of Act Two, but still provoked by Anatoly being harangued by the press, though in the hotel lobby rather than the airport or train station. By this time he had applied for political asylum, Embassy Lament now being the first scene in Act Two, which followed a brief 'prologue' with the chorus singing a reprise of the Cocktail Chorus.

Svetlana was part of the show from the very start, travelling with her husband to Bangkok and supporting him during the tournament. Someone Else’s Story, with altered lyrics, was now sung by her during Act Two.
Tim:
We have tried to keep the emphasis on the score so that it doesn't wind up being a play with music and I think we have achieved this. [From Sylvia's interview]
The media and press attention which had been a fairly big element in the London production and to a lesser degree in New York had been almost completely removed. Instead the lives of the lead characters became more a spectator sport for the other guests in the hotel, who often witnessed the goings on between the players and their respective partners and opponents.

The East-West conflict was downplayed with more emphasis being given to the personal relationships between those involved with the tournament. The characters were a bit more likeable than those on Broadway, their emotions and motivations more vivid and understandable.

The two week timeframe did reduce the impact of the affair between Anatoly and Florence, but the songs, now once again coming at more appropriate times and with much less obtrusive dialogue, helped greatly in heightening the character's emotions at just the right points.

The Soviet Machine was also retained from London, but this time it was set in the hotel gym. During the song Molokov explained exactly what options were open to Anatoly, which helped to make it clear what was at stake for all concerned.

Some further amendments were made to update the plot including some amusing references to Glasnost and the fall of the Berlin Wall.

With Sharman at the helm it looked like Chess would certainly be taking on an interesting new life.
Tim:
I rediscovered my characters again. I hadn't seen them for years. As I was working, I even remembered why I had a particular character say a particular line. It was a revelation. [From Sylvia's interview]
The story was told in a box set depicting the marble clad three story foyer of a luxury hotel complete with glittering chandelier. Two cylindrical glass lifts gave access to the corridors of two additional levels of the hotel. These raised levels allowed members of the chorus to observe the various goings on within the hotel and the lives of the characters.

The stage had louver doors on two sides with a large square hydraulic platform containing a revolve in the middle of the stage. This was used to raise various pieces of scenery from under the stage to stage level. These included a beautiful cluster of golden Buddhas, hotel seating, piano, chairs, beds etc. An under lit chess board just slightly larger than the platform could slide from up stage for use during the chess games etc. A travelator ran along the full length of the forestage and was used to move people and props at various points during the show.

A brand new logo was created for this new production, using the visual illusion of having two faces staring at each other, with the resulting silhouette between them looking like a chess piece – an intriguing idea and one which served the show well. Closer to opening the logo was slightly changed and given smoother edges and a more sophisticated sheen. 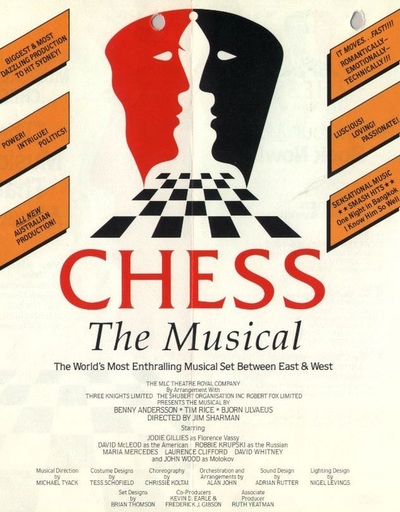 By the time Chess opened, it had a healthy advance of over $2.5million and the reviews were favourable. Unfortunately the Australian economy plummeted in the early nineties and after five months of playing to well over 85 percent capacity - over 150,000 people, the advance bookings began to fall. A further four months of good houses was required to recoup the production costs. After a renewed television advertising campaign failed to greatly increase sales and with high running costs for the 150 strong company it was sadly no longer viable to keep it running. Chess eventually closed on 7 July 1990.

There were rumours that a cast recording had been planned, but with the show closing early, this never materialised. 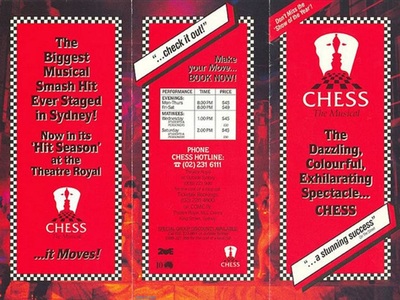 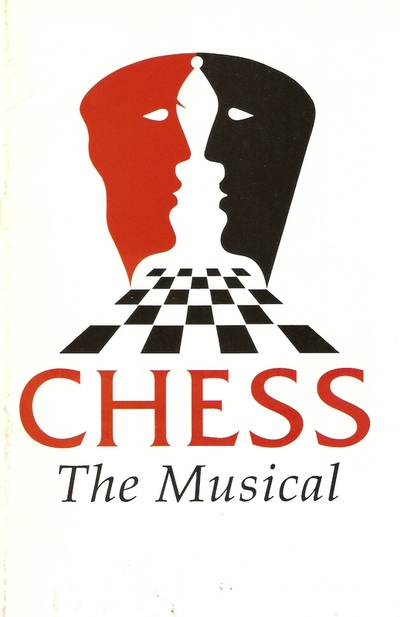 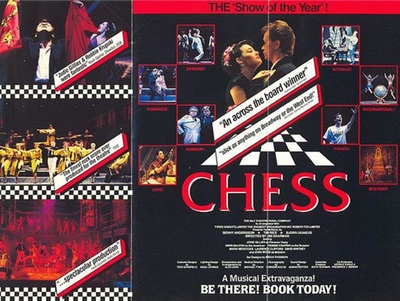