While Sydney had been mostly Tim’s attempt at a reworking of his project with apparently little involvement by Bjorn and Benny, the Stockholm variation became Benny and Bjorn’s attempt at a reworking with relatively little involvement from Tim.
Bjorn: We are returning to Chess again because of many factors, one of them being that we are tremendously proud of the album and the music. Then, Lars Rudolfsson, a Swedish director, read the two scripts from New York and London and he had an idea in his mind and he wrote down a very short synopsis. We loved it! It’s much more cinematic, much faster, in its story telling and both Benny and I said ‘Yeah! We should do it’. ‘Let’s do it in Sweden this time. This would be a tremendous workshop for future Chess. If it ends here I don’t mind. All the tickets are sold by now! But my dream is that it’s going to go around the globe again.
​
Bjorn and Benny were given the go ahead to more or less do whatever they wanted with the book and of course Bjorn was lined up with the task of writing Swedish lyrics for the songs. This gave him the chance to expand or even completely change the meanings within the songs, which in turn meant that this Chess would be the most completely different to any previous version. There was also the opportunity to add some new songs and music all of which made Chess På Svenska a truly unique presentation.

As with Sydney the project was very much a work of collaboration with a director. This time it was to be Lars Rudolfsson, who had previously experienced great success with Bjorn and Benny’s masterpiece Kristina Fran Duvemala, when it premiered at Storan Malmo Musikteater in 1995 and subsequently played in Stockholm and Gothenburg, becaming Sweden’s most successful musical of all time. It seemed the show was in good hands and admirers of the score were eagerly awaiting the transformation of Chess into its fourth major new version.

It was decided that the single location and one tournament format, as had been adopted in Sydney would be retained. The setting this time would however be Merano. Many thought this was a strange choice as it excluded any chance of including the shows most famous number, One Night In Bangkok. This, however, was overcome by having a short snippet from the original album recording played during a brief dance scene in a night club.

The period of the action was contracted for the Swedish version and now took place over just four days in 1986. Many felt this reduction in time span further reduced the impact and authenticity of the romance between Anatoly and Florence, leaving little space for true development or exploration of their emotions and feelings.

The character of Walter was cut from the production as was his merchandising interests (thus also The Merchandisers song) and his CIA connections. This production was squarely focused on the Soviet viewpoint and only Freddie remained to provide the American angle, which constantly painted a less than complimentary picture of the average American. He spent most of the time looking and behaving like a spoilt child, no doubt a product of his childhood, but a trait that left the audience feeling little pity for him, man or boy.

The book musical format was once again used, though sections of dialogue were mostly short and infrequent. What with the dialogue and two additional new songs it was inevitable that some original songs would be removed. The Soviet Machine would once again get cut, as would Press Conference, Embassy Lament, TV Interview and Talking Chess.

Someone Else’s Story was given back to Florence and a new song Vem Ar Jag / Han Är En Man, Han Är Ett Barn (Who Am I / He Is A Man He Is A Child) was written for Svetlana. The second new song Glöm Mig Om Du Kan (Forget Me If You Can) was surprisingly given to Molokov. It told of how he had once chosen a life of politics and chess rather than love and how he left behind the woman he loved.

Other songs were moved to different locations and reduced in length. Endgame was now sung in a hotel room, during which hotel staff joined in on the debates being discussed. The Deal was reduced back to the original concept album length and was sung during an argument between Freddie, Anatoly and Florence in a funfair. The first part of The Story of Chess remained at the start of the show, but the second half was moved to its original album location right at the end of the show and flanked by Drömmar Av Glas (Dreams of Glass / You and I). 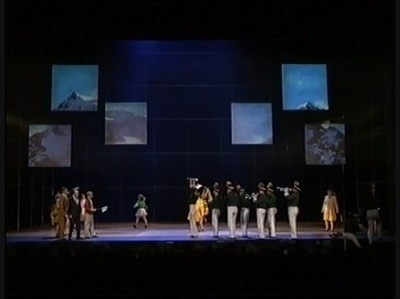 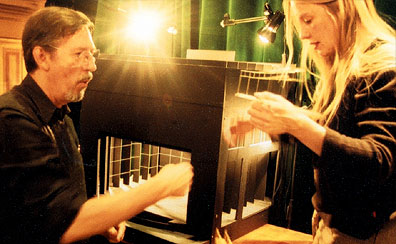 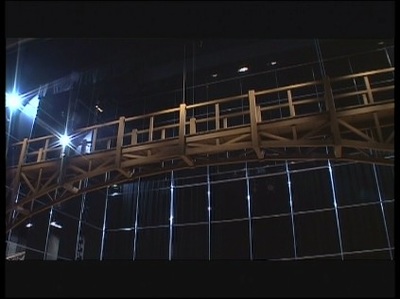 Robin Wagner, who had designed both the London and Broadway productions, was brought into the team to design the sets. The stage of Cirkus is massive and a large yet flexible set was required to humanise the story. It was decided that some projection would be used to indicate locations. These were projected on a number of large squares which were flown in from the flies to hang at various heights and locations. These shared some echoes of original ideas discussed by Wagner and Bennett for the London production, where many of the elevated sections of the chess floor were to have included projectors that would cast images onto other sections of the stage and backdrops.
﻿Robin Wagner: I have worked with Chess both in London and New York. No version was like the other. In London Chess was a sort of choreographed concert form, in New York the show became more realistic, more traditional. Here in Stockholm we have chosen a third way. We want to tell a story simply, not drown it in effects. It is a question of making every moment on the stage as real as possible, not working after some great theoretical models.
​
The basic boundaries of the stage were lined in black with silver strips marking out the areas into a grid of squares, again very similar to London. The stage floor was a basic black floor but high powered lights were used to create chequered outlines and other effects at certain times. Most of the set was quite minimal and was limited to a couple of beds and a few tables and chairs, with really only the funfair scene having a large number of set pieces. The other two main pieces of set was a huge wooden staircase and a large wooden framed multi levelled structure, sectioned into squares, from which the chorus watched the final chess game. The entire frame slowly moved down stage towards the players until the match was won. At this point the structure split into four moving towers as the tournament came to an end and the chess world began to leave Merano.

The general pallet of the piece was more like Broadway than London or Sydney, with quite dark sombre colours in most scenes. Most looked like they took place at night or indoors and there was little indication of the spring that the Merano people sung of so fervently at the beginning of the show. This did lend the production a brooding claustrophobic atmosphere, as was no doubt the intention.

Stockholm appeared to be to Sydney what New York had been to London. Where London had been bright and exciting with a bit of a confused book, New York had a better basic structure, but dialogue that slowed the flow of the piece and with the dark sets and costumes created a show that felt rather dowdy. Where Sydney had been given another new structure, it had re introduced the beauty of the music and a more consistent musical through line. Stockholm slightly restructured the book again, but dulled down the spectacle and lost some of the visual joy of its much brighter, more fun loving older sibling back in Sydney. 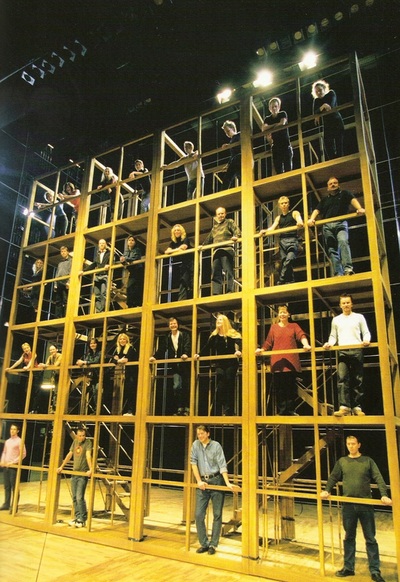 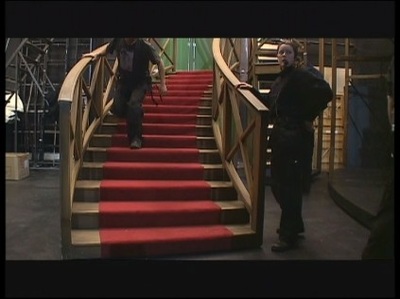 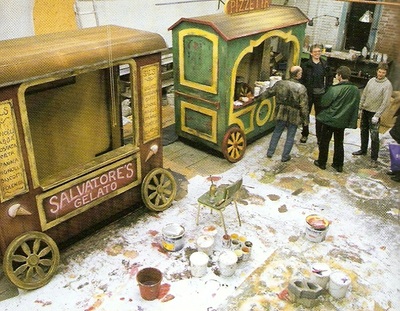 The style of direction was certainly different to that employed before, some scenes were played in a somewhat non naturalistic manner, which sometimes made the meaning a little confusing. Dancing, skipping, and constantly ‘typing’ Arbiter assistants was just one of the quirky staging decisions that were considered curious – though funny. It was the same with the reduction of Endgame to a ‘public discussion’ in a hotel room between Svetlana and Anatoly, eventually expanding to include KGB guards, hotel cleaners and porters. These and other ideas were what made Chess Pa Svenska so unique and interesting to the many fans that made the journey to Stockholm from around the world to see it.

Other more powerful and universally praised scenes were those such as when Florence recalls the night her father was captured during the Hungarian uprising, when a Soviet army tank invaded the stage and panic and fear was depicted by the cast as loved ones were arrested, killed and beaten. Likewise the scenes where Svetlana and her son were forcibly take from a church and whisked off to Merano to be used in a blatant attempt at blackmailing Anatoly and securing his return to Russia. These scenes highlighted and beautifully captured the tense situations that the characters found themselves and added greatly to the power of the story, introducing a stronger sense of the East-West hostilities that had been lost in the Sydney version.

This production proved beyond doubt that Chess was best located in a time period when the Cold War was still at its height. The tension that this caused was after all one of the main things about his original idea that had intrigued Tim and was and should very much remain a part of the fascinating tapestry that the story and music of Chess attempts to weave. 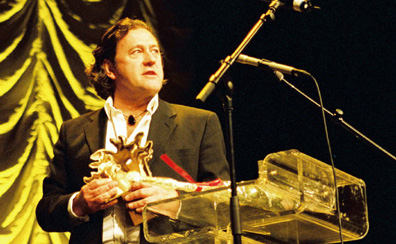 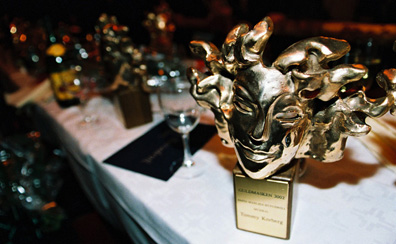 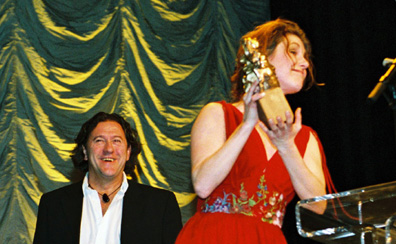 The production received great reviews and its cast and production team went on to be nominated for and win several Golden Mask awards. 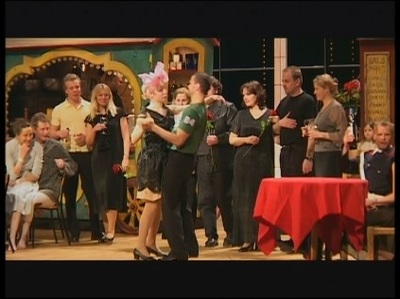 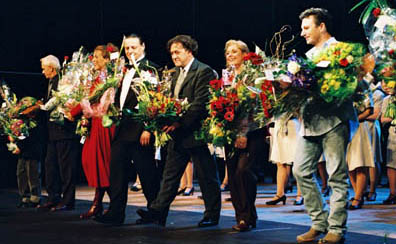 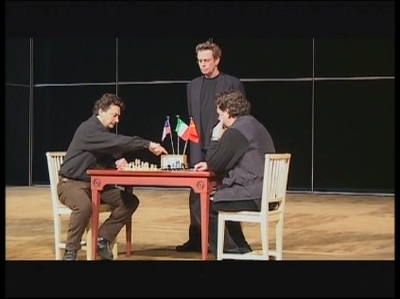 A CD recording of the show was released in October 2002.

On March 16th, 20th and 23rd 2003 the performances of Chess were recorded by Swedish Television for transmission on New Year’s day 2004 It was later released on DVD, complete with a bonus disc of the documentary The Musical Came Home – the story of how Chess came home to Sweden.

﻿Move back to HOME﻿