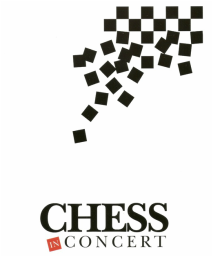 In October 2007 it was announced by Tim Rice that a concert version of Chess would be staged at the Royal Albert Hall in London on Tuesday 13th May 2008, 22 years almost to the day after the West End production had opened at the Prince Edward theatre (14th May 1986). At this point no casting details were available, but the announcement was received with great excitement by fans of Chess and musicals in general. Who would take the lead roles? Whoever they proved to be it was reasonable to assume they would be names from the world of musical theatre so a unique event was anticipated by all.

Tickets began to sell fast, but began to sell even faster once cast details started to filter through. Soon a second date was added. Many hoped it would be the 14th May, so that one of the concerts would exactly match the opening date of the original, but scheduling made this impossible, so the 12th was added and began to sell as quickly as the 13th. People wanted to see this event twice, so there was no shortage of egger purchasers for these additional tickets. 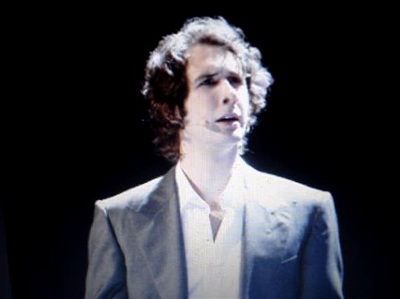 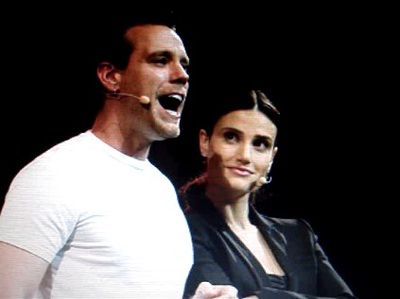 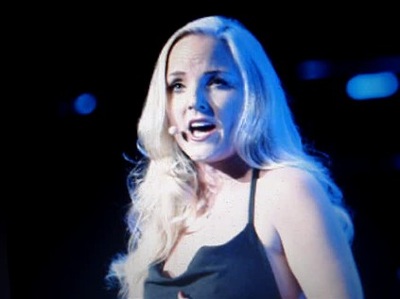 Any tickets that had remained unsold by the time the final casting details were announced did not remain unsold for long. Chess was going to be a sold out event, with an amazing cast with names from the musical and pop world lined up to provide varied and exciting renditions of the now legendary songs.

The part of Florence was to be played by Broadway and West End star of Wicked, Idina Menzel. Anatoly by top-selling US recording artiste Josh Groban. Freddie by Adam Pascal. Svetlana by West End star of Wicked and We Will Rock You, Kerry Ellis. Walter by Clarke Peters. Molokov by David Bedella and The Arbiter by Wet Wet Wet Singer and West End star Marti Pellow. Cantabile were to provide the voices for the embassy officials. They would all be backed by the 100 members of the West End Chorus and the City of London Philharmonic, with Stephen Disley on the great Royal Albert Hall organ. 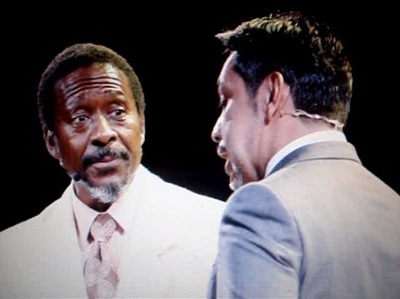 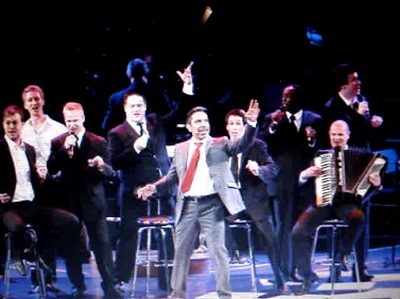 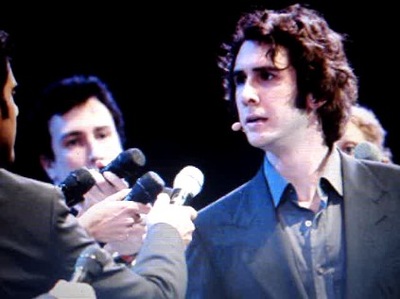 The concerts were to be recorded for broadcast on American television and for future release on both DVD and CD.

Chess unlike almost any other modern musical had been presented in numerous considerably different versions throughout the world over the 22 years since it had first opened in London. Tim Rice had long wanted to establish a definitive version of the show and this he hoped would be his chance to do so. By returning to his original work, the 1984 concept album, he and director Hugh Wooldridge began to make small adjustments to the published scripts, which had of course been expanded and altered from the original for both the London and Broadway productions.
Tim:
It had never been our intention to stage the work exactly as it was on the original album. We made certain additions and alterations for the production at the Prince Edward Theatre, most of which worked. However the enforced uneasy combination of two distinguished directors' viewpoints made for a slightly muddled version that was still being fixed way beyond opening night. Eventually it was clear that there was little point in endless tinkering with the show, which was just about holding its own - better to start again with a totally new concept for Broadway. So drastic alterations were made, some for reasons that, at this distance, seem quite bewildering. An American book-writer joined the team (although ‘team’ was soon to prove a less than accurate term), the operatic nature of the work thus eliminated, the storyline was changed substantially and the set was completely redesigned. Characters changed nationalities and even names; there was a different World Chess Champion at the end of the show; Merano, both song and venue, bit the dust; and a slew of new songs were added, many of which had been subtracted by opening night, with the notable exception of a new song for Florence, Someone Else's Story, which more than held its own with the rest of the score. 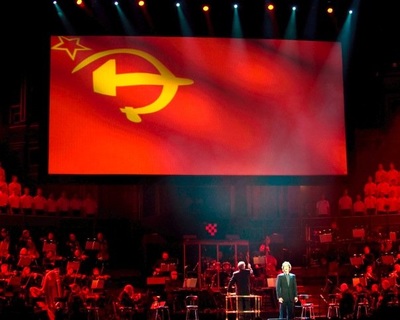 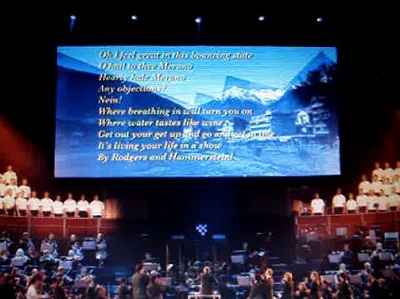 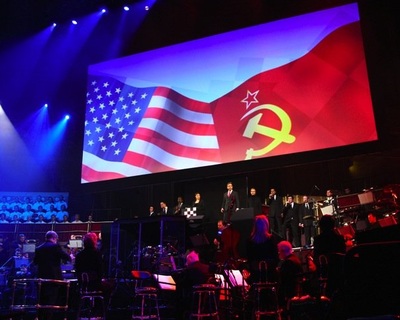 By sticking fairly closely to the original London structure with some adjustments to lyrics and adding just a few new lines of dialogue Tim and Hugh came up with their preferred running order for the piece. The performance began with the instrumental Prologue as had been created for the Broadway production. Surprisingly, having always said he felt that Story of Chess worked best when used as an epilogue it was retained in its original stage position at the top of the show. Someone Else’s Story was inserted into Act Two, sung by Svetlana rather than Florence and positioned after TV Interview and before The Deal. Pity the Child was moved back to Act Two as originally intended and positioned between The Deal and I Know Him So Well. A Piece of Pity was reinstated and positioned where it originally occurred on the album, just after Florence Quits. The time period was now 1979 and 1980, which meant the original intent of reflecting the tensions of the Cold War era could now be reinstated, with all updated references to Glastnost and the tearing down of the Berlin wall etc. being removed.
Tim:
I accept that the plot is complex - I prefer intelligent, or sophisticated, but I would say that, wouldn't I? I know for sure that contrary to the views of some critics way back then, the story is certainly more than plausible. Many in the real world of chess have told me it is not complex enough, as any study of chess and politics over the past 50 years will illustrate - as will a quick look at the life and antics of the late Bobby Fischer. In essence, Chess is as it was back in 1984. With the passing of time it is now, to its advantage, more clearly a period piece. To think that the magnificent artistry of Bjorn and Benny had only been known to the world for ten years when we embarked upon Chess is extraordinary; the world now knows that their music is timeless and lasting. I hope that the work I was fortunate enough to create with them will one day be recognised as a full part of their brilliant legacy. 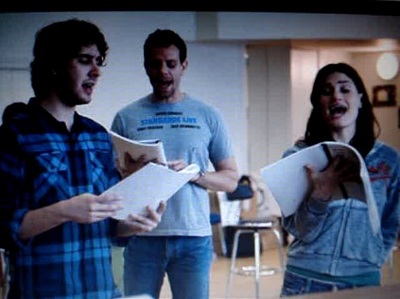 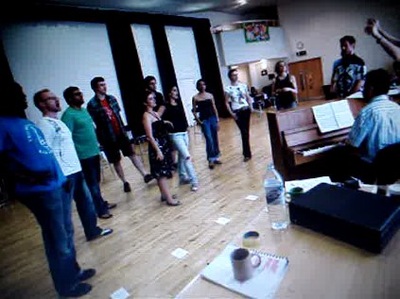 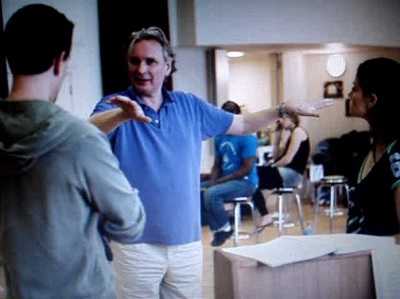 Rehearsals for the concerts were minimal, with only four days of rehearsals at the Dragon Hall rehearsal rooms and then one day in the Albert Hall. Although he was essentially directing a concert version of the show, Hugh Wooldridge wanted to create a semi theatrical landscape in which the story could unfold. Obviously sets would have to be kept to a minimum and indeed really only consisted of a few platforms to provide different acting levels and of course the obligatory chess board.

Above the stage hung a huge video screen which brilliantly illustrated the details of the chess games taking place during the story, and helped to set the locations of each scene. It also provided some indication of the media attention focused on the games, much as had been eventually achieved by the vidiwall in London.

Stage space was of course limited, most of it being taken up by the London City Philharmonic, so dance sequences were restricted, but they were there. With skilful use of the chorus various elements and indications of how a fully staged version might look were represented. 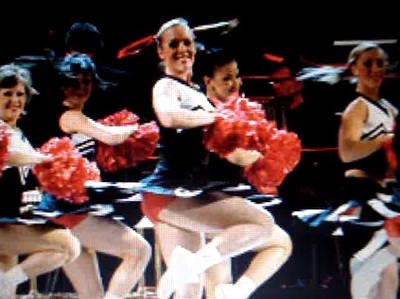 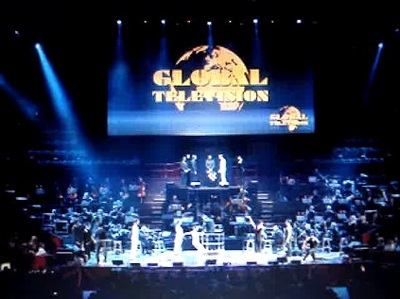 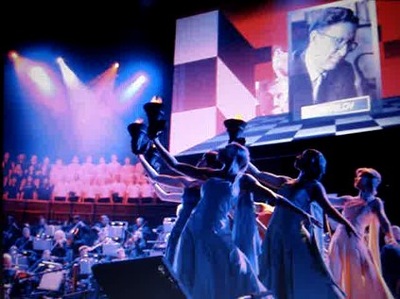 The Arbiter had a troupe of assistants who made a number of stylised moves and gestures as he pronounced his conditions of play.

The Merchandisers was a troupe of cheerleaders who energetically ‘sold’ the game to one and all, which ended with a flurry of indoor fireworks going off all the way around the circle of the hall.

During Chess while Freddie and Anatoly played chess on the upper platform the dance chorus performed a ballet representing the moves being made on the board.

One Night in Bangkok started with girls in beautiful golden Thai costumes who were eventually replaced with a number of tourists in a multi coloured array of costumes, the Thai girls moving off to position themselves behind the orchestra, looking like animated statues from one of the beautiful interiors of a Bangkok temple.

The Soviet Machine was wisely located in a Thai bar with several bar girls providing the dancing, rather than some Russian Cossack style moves, which would have undoubtedly proven difficult in the limited space.

Endgame began with a beautiful display of burning torches with the chorus carrying these around the stage, providing a perfect indication of the ceremonial element of this final match. Later the dancers once again acted out chess moves and emphasized the pressure being put on Anatoly as he tried to decide what to do in the game and in his life. 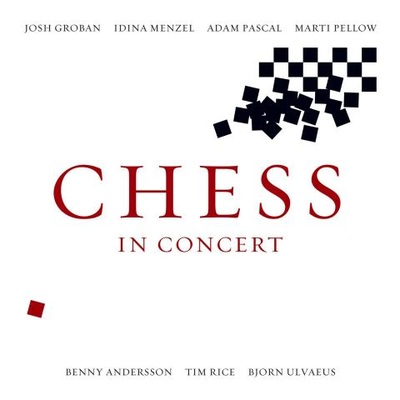 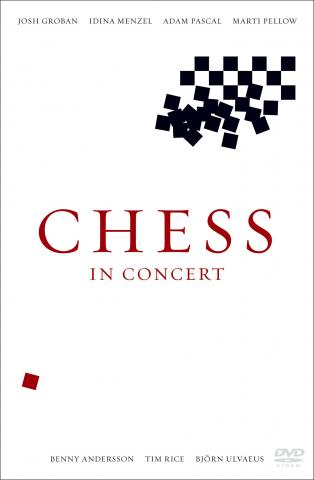 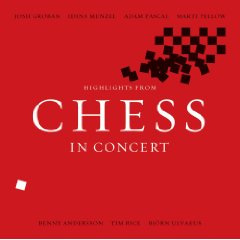 The audience at the Royal Albert Hall greeted the production with open arms and showed their appreciation by jumping to their feet at the end of both acts. Many though experienced very bad problems with the Albert Hall’s acoustics. This was an ongoing problem in the hall and was undoubtedly made worse by the rock elements of the score. Sound issues aside it still proved to be an enjoyable evening of Chess music and most fans were eagerly awaiting the release of the CD and DVD.

The concert was broadcast on US television channel PBS on Wednesday 17th June 2009 and received good reviews and viewing figures. It was later broadcast in UK cinemas on 7th September 2009.

The DVD and CDs (a double CD pack and a single highlights version) were released on 16th June (US?) or 14th September 2009 and as had been hoped the sound on these was far superior to what fans had experienced in the hall on the night.

Move back to HOME