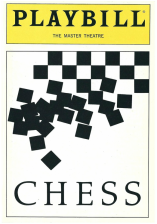 ​Presented by The Artist's Perspective at The Master Theatre

This production was small scale, with a cast of fourteen and a five-piece orchestra. The libretto and book were revised by Tim Rice after being contacted by the Artists' Perspective.

Tim Rice:
When the Artists' Perspective approached me in early 1991 about a new production for New York City I was happy to agree on the condition that I could rework the show for such an important theatrical city, in the hope of establishing a definitive final version for all future productions. 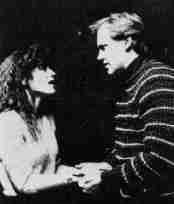 The character of Walter was cut and, as had been the case in Sydney, Svetlana had accompanied her husband to the tournament. The story is set in 1972 and mostly follows the London structure, with various alterations, cuts and amended lyrics. Where I Want to Be, was used in several reprises by each of the main characters.

Politics and chess took a back seat in the plot, as the story very much focused on the main characters and Molokov's role in events was somewhat less important than in previous productions.

Tim Rice:
The Broadway version was very political and the timing wasn't right. It was set in 1988, and things were cooling off on a political level at the time. Now we've changed the time to 1972 and eliminated most of the spoken dialogue. The story is told through the music and lyrics, and we've beefed up the part of Svetlana, so it`s not a triangle anymore. More of a square, or maybe a rectangle. Actually, the story is now more about human relationships than politics. It`s the story of two men pursuing their ambitions in a way that`s detrimental to both their private lives.
Although Freddie resigned in act one, he returns to the game for a rematch the following year in Bangkok.

Plot lines to do with Florence's father were removed and so that element of emotional blackmail was no longer part of Anatoly's reason for returning to Russia. Endgame ended with both players having won five games each, so there really was no 'winner' of the game at the end of this production.
Act One
Prologue: The Story of Chess
Merano
What a Scene! What a Joy!
Where I Want to Be
How Many Women?
U.S. vs. U.S.S.R.
Arbiter's Song
Chess (Game #1)
A Model of Decorum and Tranquility
Chess Hymn
Someone Else's Story (Svetlana)
Nobody's on Nobody's Side
Merchandisers' Song (Freddie and Ensemble)
Mountain Duet
Who'd Ever Think It?
Chess (Game #2)
Florence Quits
Pity the Child
Where I Want to Be (Reprise) (Anatoly and Florence)
Anthem

Act Two
Act II Prologue (Arbiter)
One Night in Bangkok
Heaven Help My Heart
The Argument
Confrontation (Anatoly, Molokov and Svetlana)
No Contest (Anatoly and Freddie)
I Know Him So Well
The Deal
Endgame
You and I (Reprise)
Epilogue (Florence and Anatoly)